$600 million dollars a year in unanticipated, if not unnecessary college education costs due to students transferring from one college to another. According to Complete College America's "The Four Year Myth" 60% of undergraduates transfer at least once prior to completing a four-year-degree track. In so doing they lose credits for courses taken, and extend their length of stay in college by a year or more.

Six hundred million dollars is an eye-opening number, yet it still leaves you thinking about "all those poor people," rather than, "That's me!" Furthermore, there are other, often hidden costs associated with lingering around the ivy-covered walls longer than prescribed.

In a previous blog, The Four Year Myth A True Story (March 20, 2017; scroll to read it), there is cited the costs of two extra years. That includes cost of attending four extra semesters plus income not earned over that same period of time. The dollar figure cited ($220,000) is not theoretical, but actual and is borne by one family for one student for one undergraduate diploma.

Other hidden costs, seldom considered, include the time value of money, also known as opportunity cost. Here are two examples:

My question is, "What else could you do for your student with $300,000?" Until that question is answered it is hard, if not impossible to answer the question, "Four years of college: how much is that worth?"

Granted, there are other virtues beyond the "sheepskin." Many students find their life partner at college, enter into a career path that is fulfilling and remunerative, and develop a network of strong relationships that serve a lifetime.

I advocate, therefore, it's not just price, but value. Determining value takes work that, I believe, most families would do if they knew to do it. You've read this so now you know.

I had planned to write more from the Complete College America's white paper, but . . .

yesterday I was on the soccer field with a young man who went off to one of America's top engineering universities after his graduation from a Charlotte Mecklenburg public high school. I asked if he graduated in four years or five. "Six" was his answer. 6 -- six -- twelve semesters -- and this is a bright, responsible, industrious individual (my esteem for him, having known him for eight years or more). Another young man who was with us, and is currently a senior at an area high school, responded, "Yeah, engineering is a five-year degree, I hear."

There's a problem (my opinion) when students enter college with a defined notion that 4 years to a degree is unrealistic. I promise you, the university in question lays out a four year program. Why didn't my friend, therefore, complete his degree in the prescribed four years (eight semesters)?

The young adult I reference is no slouch. He just bought into the story line that "it doesn't make a difference how long it takes, just so long as you earn your degree."

Complete College America is a non-profit formed to address the obvious problem of students attending but, seemingly, never graduating with a marketable education. Among the group's publications is the "Four-Year Myth."

Are you operating under the delusion of that myth?

I can't recount how many parents (especially dads) have assured me, "I've told my kid 4 years -- that's it!" Then what? With your students and you into the thing at costs approaching, if not exceeding, six figures are you really going to abandon it? Can you send your children off into the workplace with "some college" as their resume enhancement? In this and several, successive entries I will summarize and comment on the key points.

First: In American higher education, it has become the accepted standard to measure graduation rates at four-year colleges on a six-year time frame. . . .  As lifetime savings are depleted and financial aid packages run out, the extra time on campus means even more debt, and for far too many students, additional semesters do not result in a degree or credential.


There are two, primary reasons students do not finish a "four-year degree" in four years.

Think about those: Next blog will address the hidden costs of extended stays in college. For now we'll leave it with this quote from Complete College America.
However, something is clearly wrong when the overwhelming majority of
public colleges graduate less than 50 percent of their full-time students in four years.
Current on-time graduation rates suggest that the "four-year degree" . . .  [has] become little more than modern myths for far too many of our students. The reality is that our system of higher education costs too much, takes too long, and graduates too few. 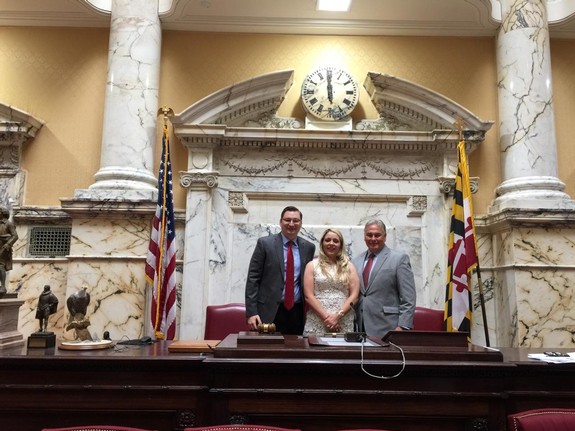 Pictured are Maryland State Senator Michael Hough, Mrs. JoeyLynn Hough and Rev. Dr. George Gately. Mike invited me to offer the invocation for the Senate of Maryland Friday, February 17, 2017. It was my pleasure and honor to do so.

Mike is my cousin. His great-grandfather, Stanley Gately, was my father's brother. Stanley was killed in battle in September, 1944, Germany. He is buried at Arlington National Cemetery. Following his death my father and mother took in his daughter Regina "Jean" Gately, and raised her until her 18th birthday; at which time she attained employment and moved out on her own. Jean married Earl Dilley, and they brought three children into this world -- Catherine, David and Beth. Beth is Michael's mother.

Here is a transcript of the Invocation:
ALMIGHTY GOD, we address you this morning from the common ground of our faith and dependence on you. Giver of life and all good things, we acknowledge your providential care and benevolence; and we do so with thankful hearts.

First, as we are admonished to do, we give thanks for our nation and those who lead us in government. May they be conscious of the benefits of faith and prayer, and may they each and all draw faithfully upon that wisdom which is from on high: first pure, then peaceable, gentle, open to reason, full of mercy and good fruits, without uncertainty or insincerity.  And the harvest of righteousness is sown in peace by those who make peace.

We also give thanks and lift up to you those who serve this sovereign and good State of Maryland.

Our prayer of gratitude and for mercy is made also on behalf of the Staff of the Senate, and in particular those who labor here year-round and keep this government running well. We also include those who serve in often unnoticed ways, but without whom our work would grind to a halt -- those who serve in maintenance and security and clerical positions.

Setting aside our partisan differences for this moment of unity in your presence, merciful God, we ask that you give us wisdom with compassion in these tumultuous days of strong opinions. We ask that you help us balance

You are God Almighty, and you are the author of our lives. We close this petition for your grace with this: every Senator is also a member of a family. They love their families and their families love them. We pray for the health, the safety and the general well-being of each Senator and each senator's family.

Dear God, thank you for your presence among us, for listening with a mind to answer, and for the gift of life which has been imparted to us through your own Spirit. Amen.